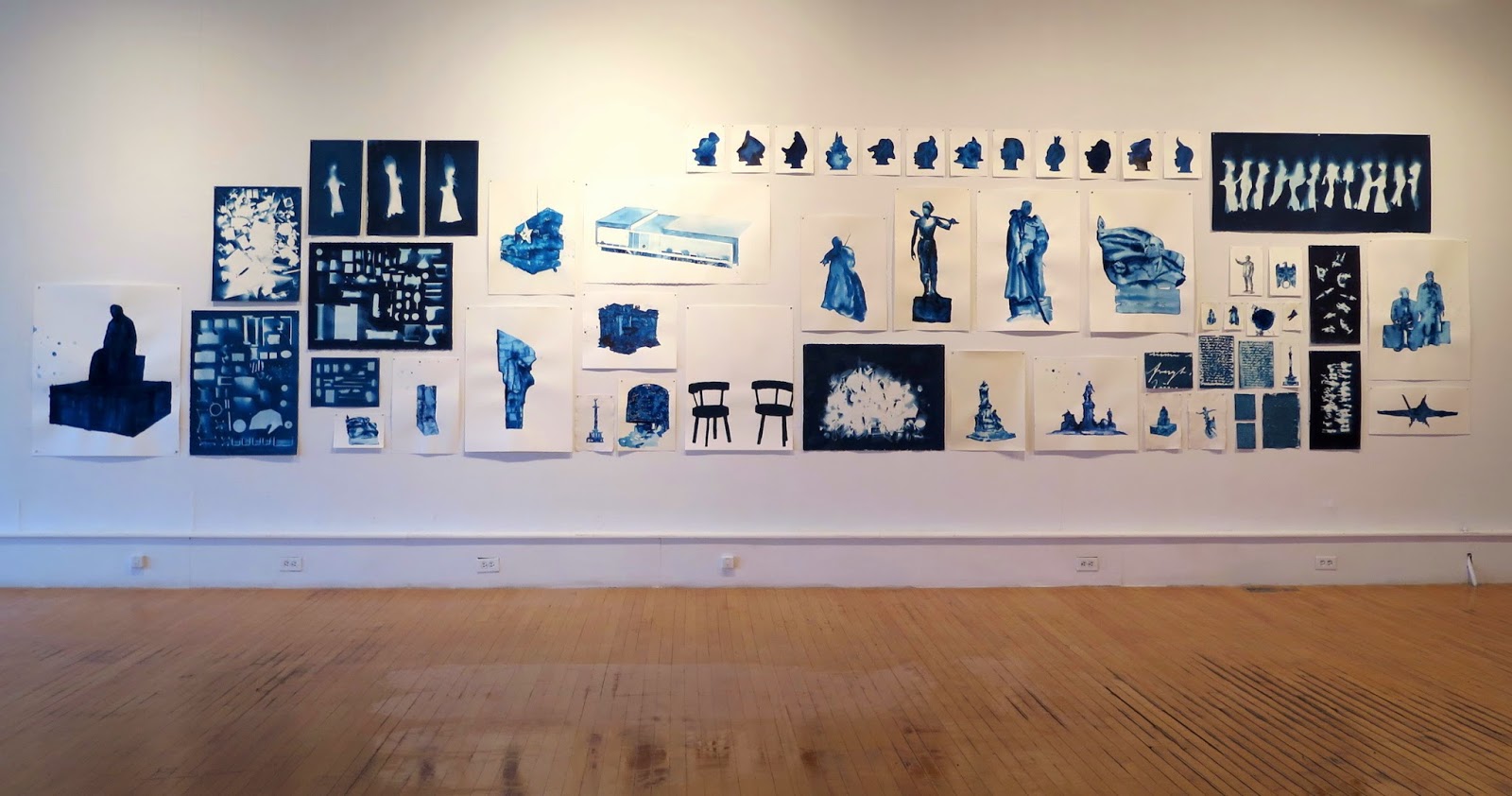 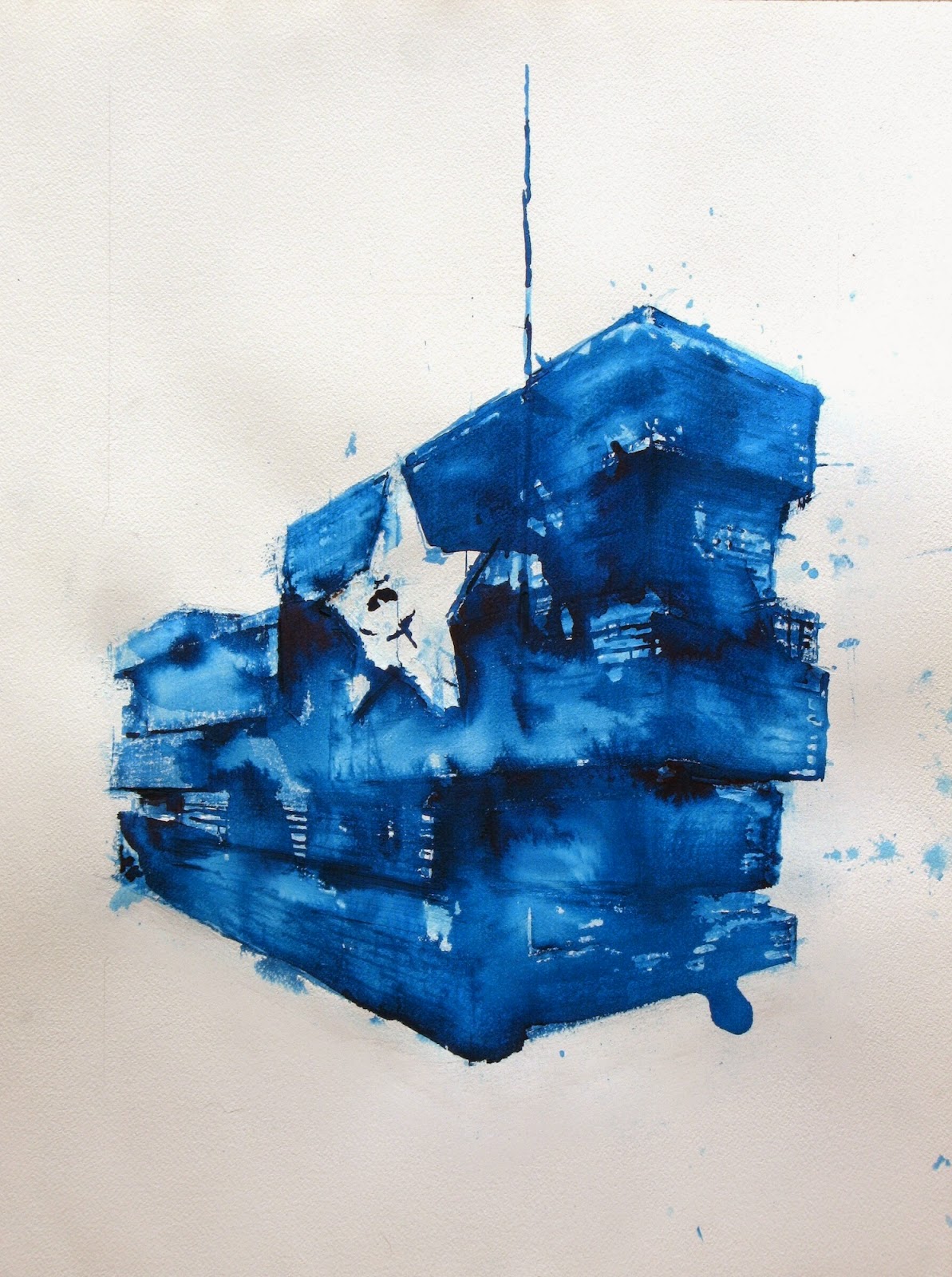 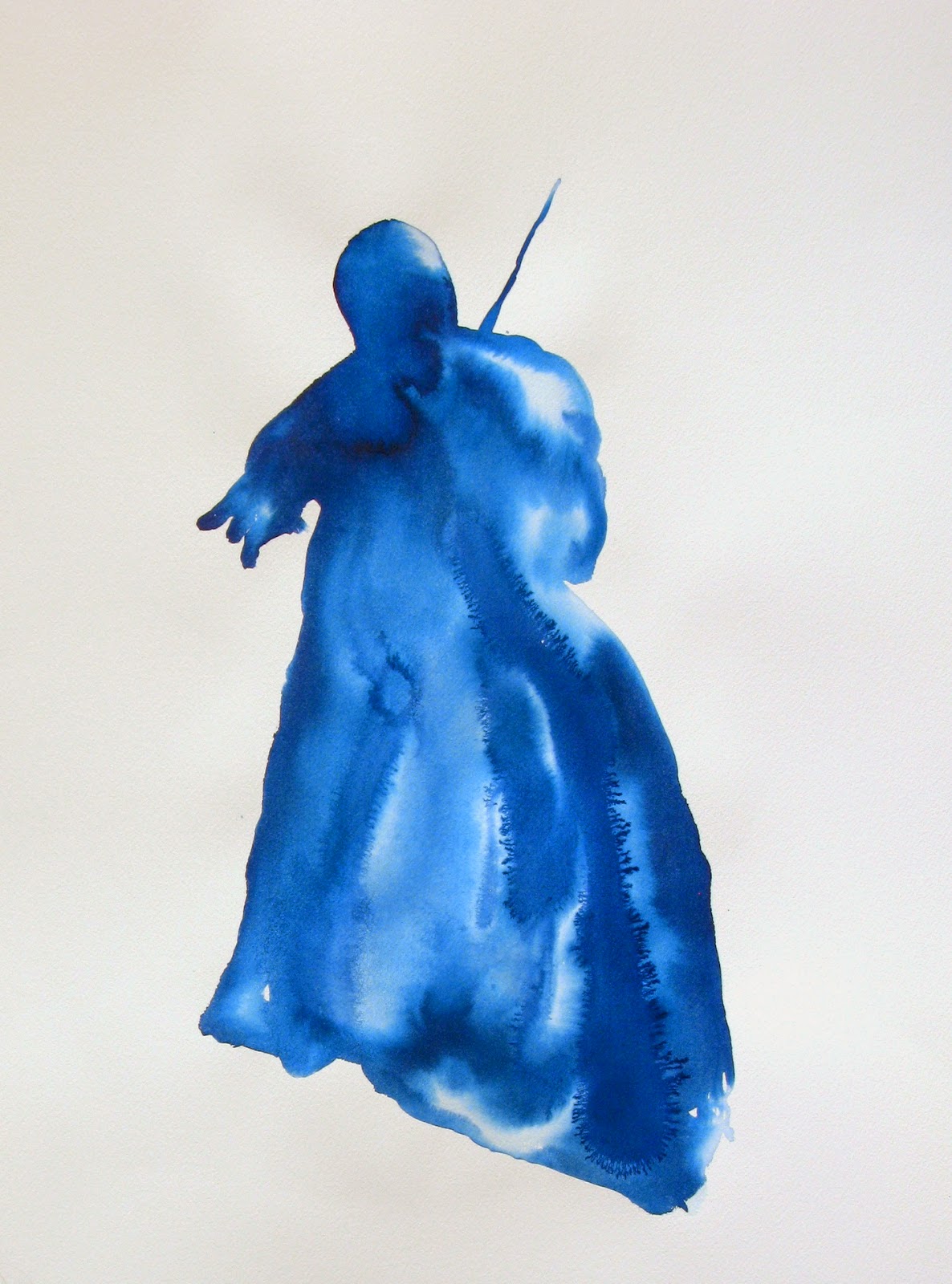 This drawing is based on the statue of a Russian soldier located in the Tiergarten in Berlin. It is part of the Soviet War Memorial in the former West Berlin. 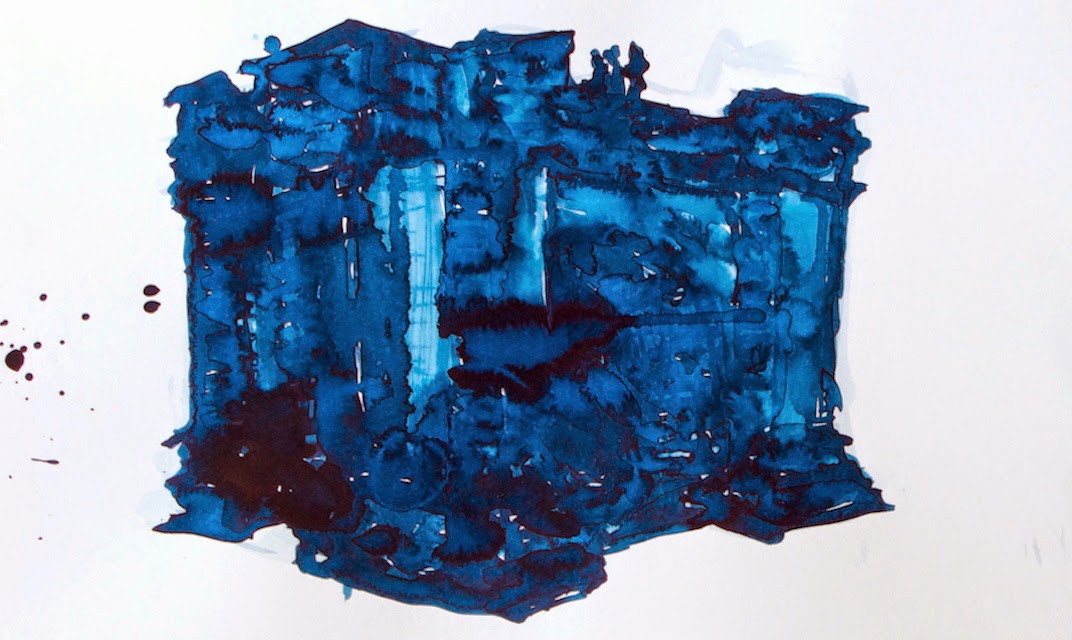 This drawing is based on a small sketch Adolf Hitler made for his architect, Albert Speer. It was hie plan to build this enormous triumphal arch (4 times the size of the one in Paris) as part of his redevelopment plan for the city of Berlin, which he planned to re-name Germania, capital of the world.
"Hitler- Triumphal Arch" (Unbuilt), Ink on Paper, 15 ¾ x 19 ¾ inches, 2012 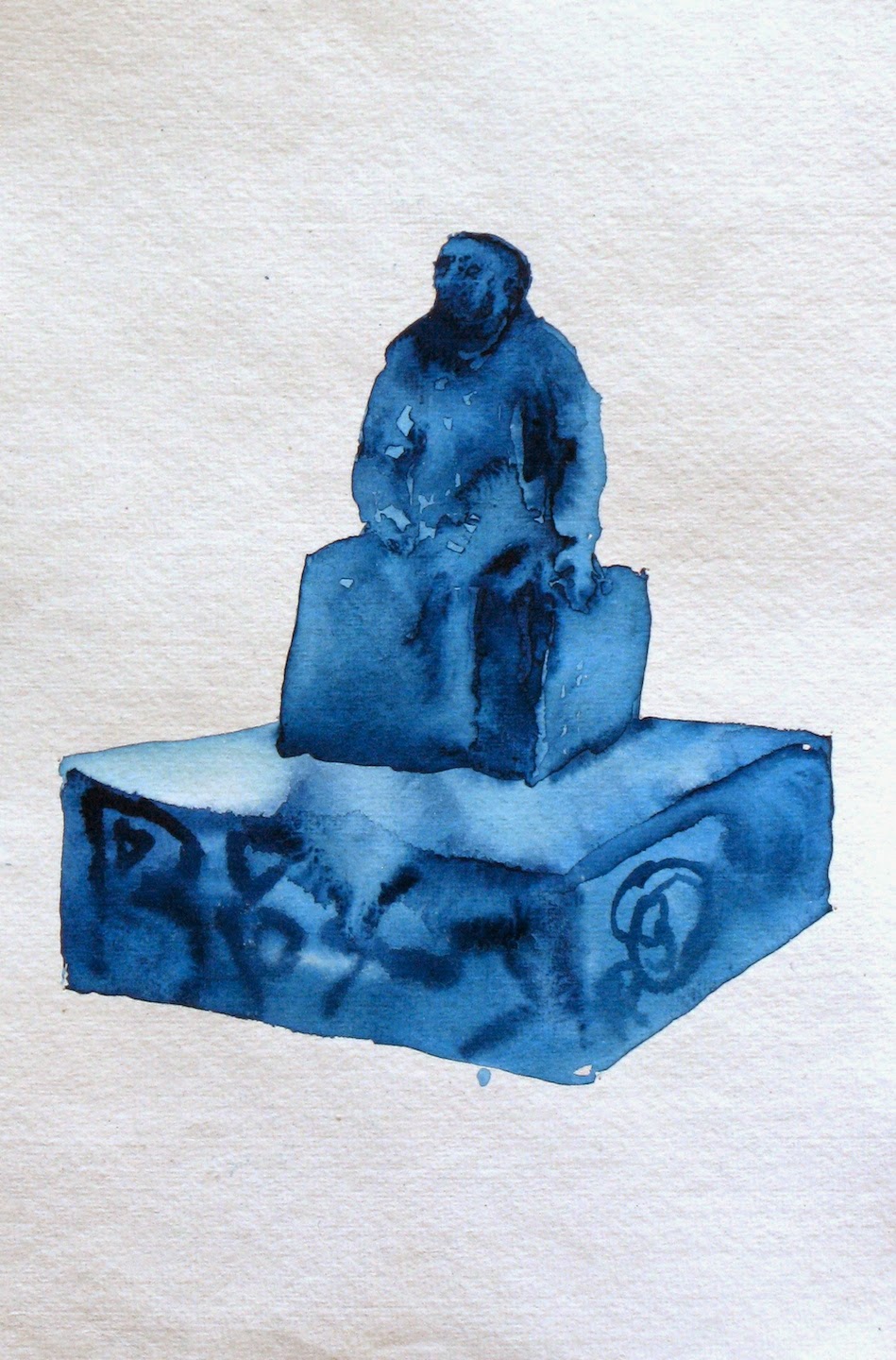 Based on the statue of artist Kathe Kollwitz in Prenzlaurberg. Situated in a children's play park, children climb over and sit on the head and shoulders of this statue. 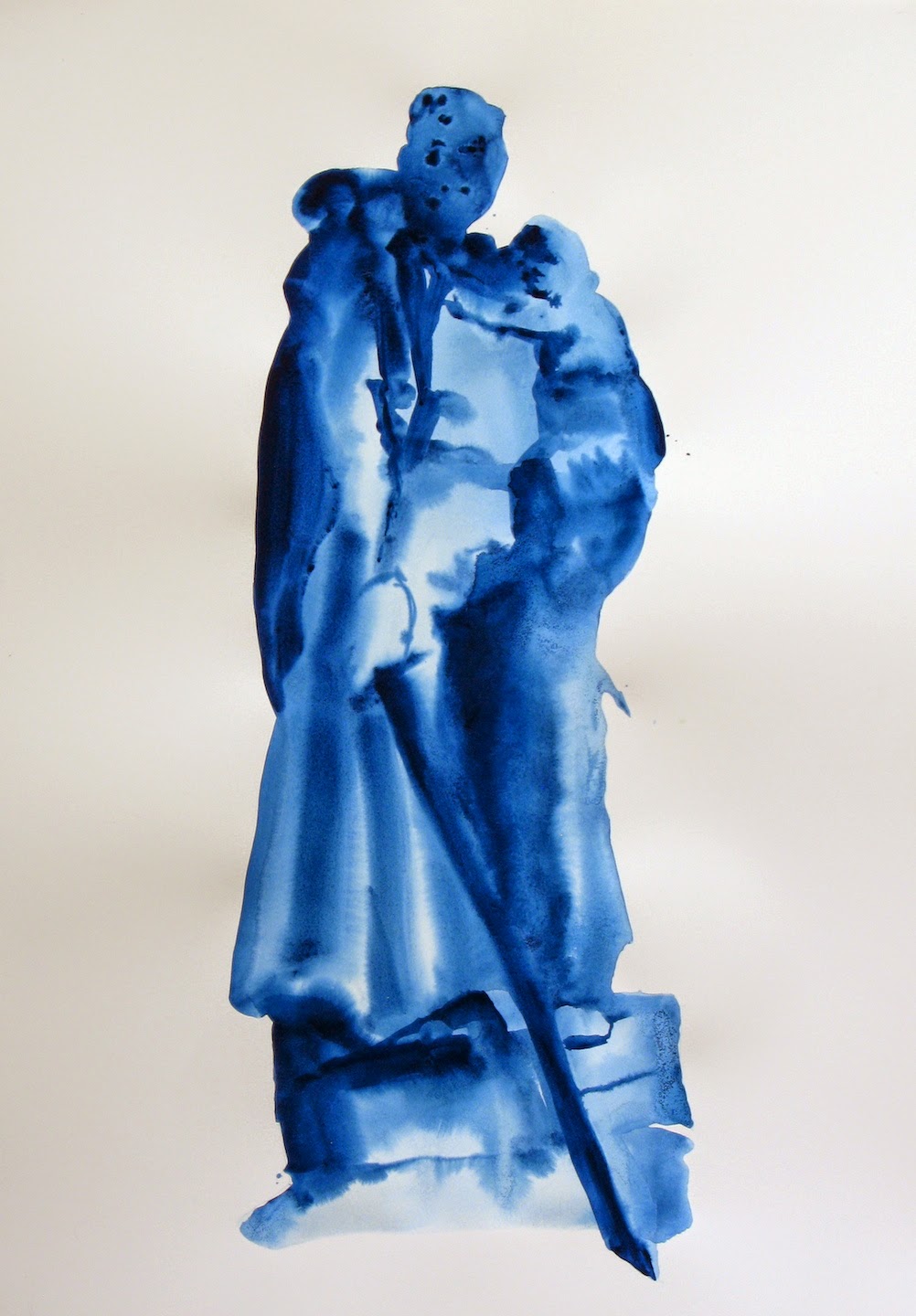 Treptower Park in (former East) Berlin is the site of a Soviet War Memorial that commemorates the 50,000 Soviet soldiers who died in the battle of Berlin, April-May 1945. The focal point is this 12 meter tall statue of a soviet soldier who holds a baby on one arm and in the other hand is sword that slices a swastika. More than 5,000 soviet soldiers are buried in this location.

The Victory Column in Berlin (inaugurated in 1873) commemorates Prussian military victories in wars with Denmark, France and Austria. It was moved to its current location in 1939. Hitler had it located there in order to incorporate it into his monumental re-design of Germania, capital of the world. It has been the site of many historic events including  Barrack Obama's speech as a presidential candidate in 2008. My great grandfather was a guilder who worked on the  golden, winged figure at the top. This was a central feature of  the  1987 Wim Wender's film "Wings of Desire". 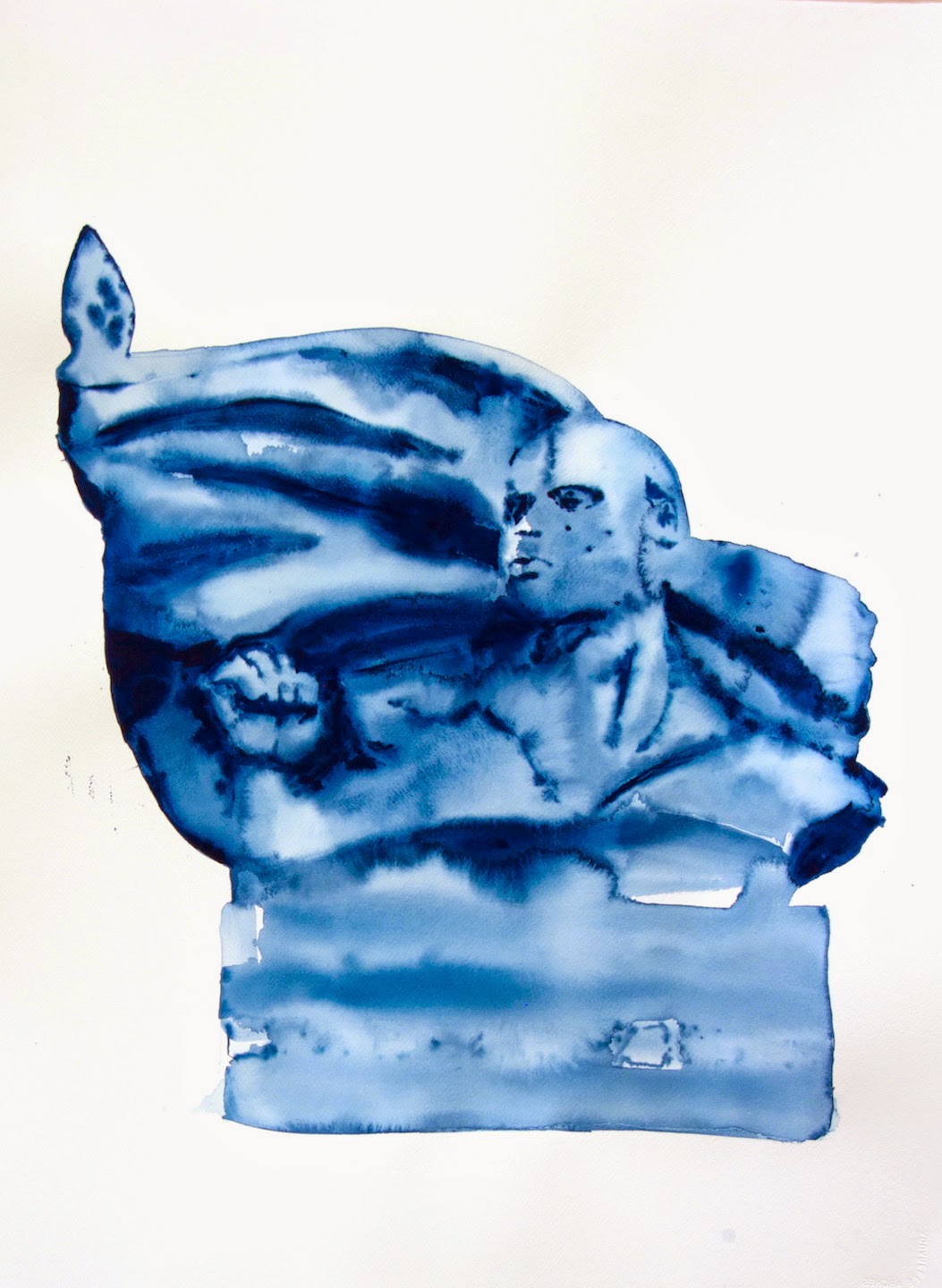 Ernst Thaelmann was the leader of the communist party of Germany during the Weimar Republic. He was arrested in 1933 and held in solitary confinement for 11 years before being shot in 1944 on Hitler's orders.  This drawing is based on the 46- meter bronze monument built between 1981 and 1986. It is located in the district of Prenzlauer Berg in (former East) Berlin. 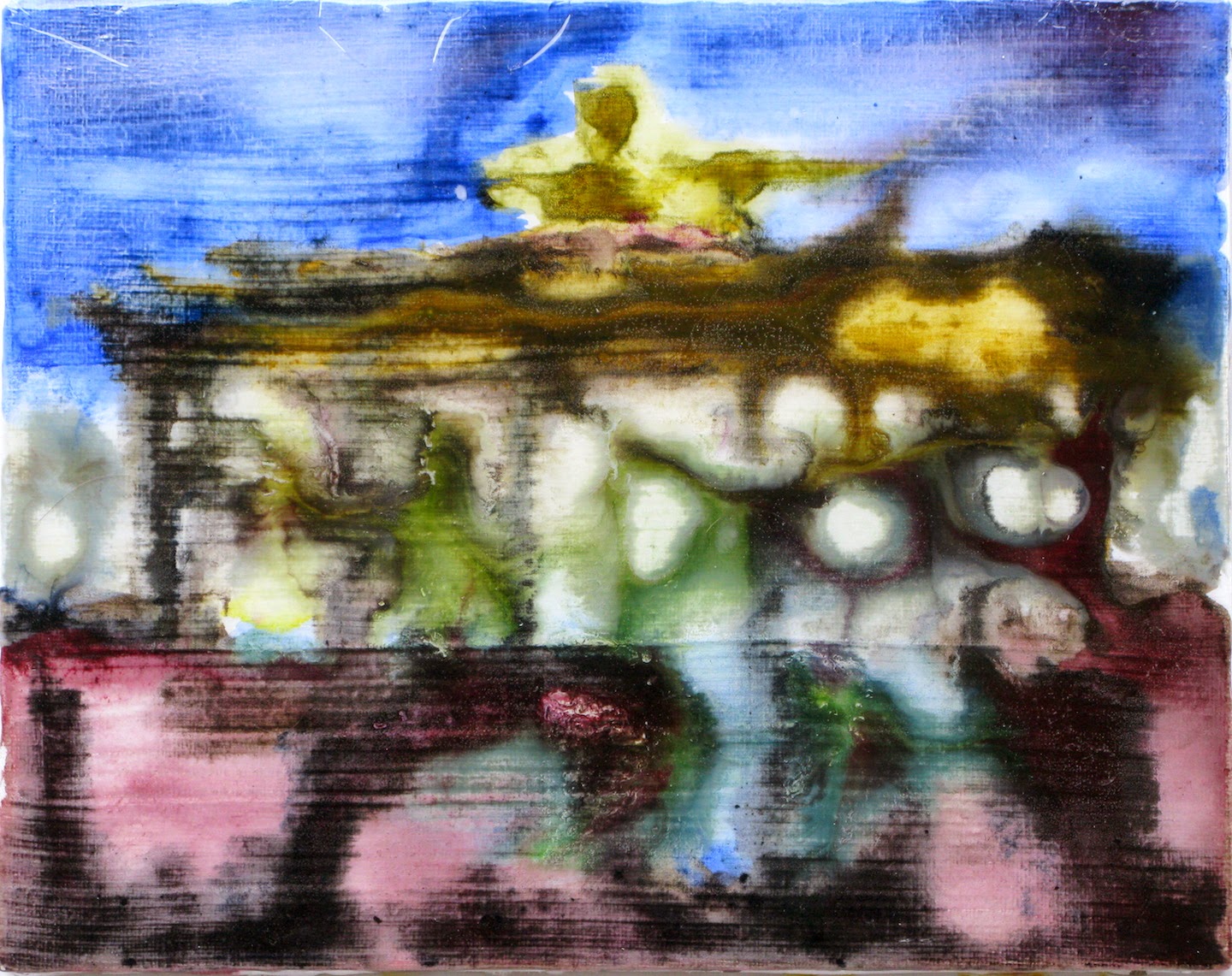 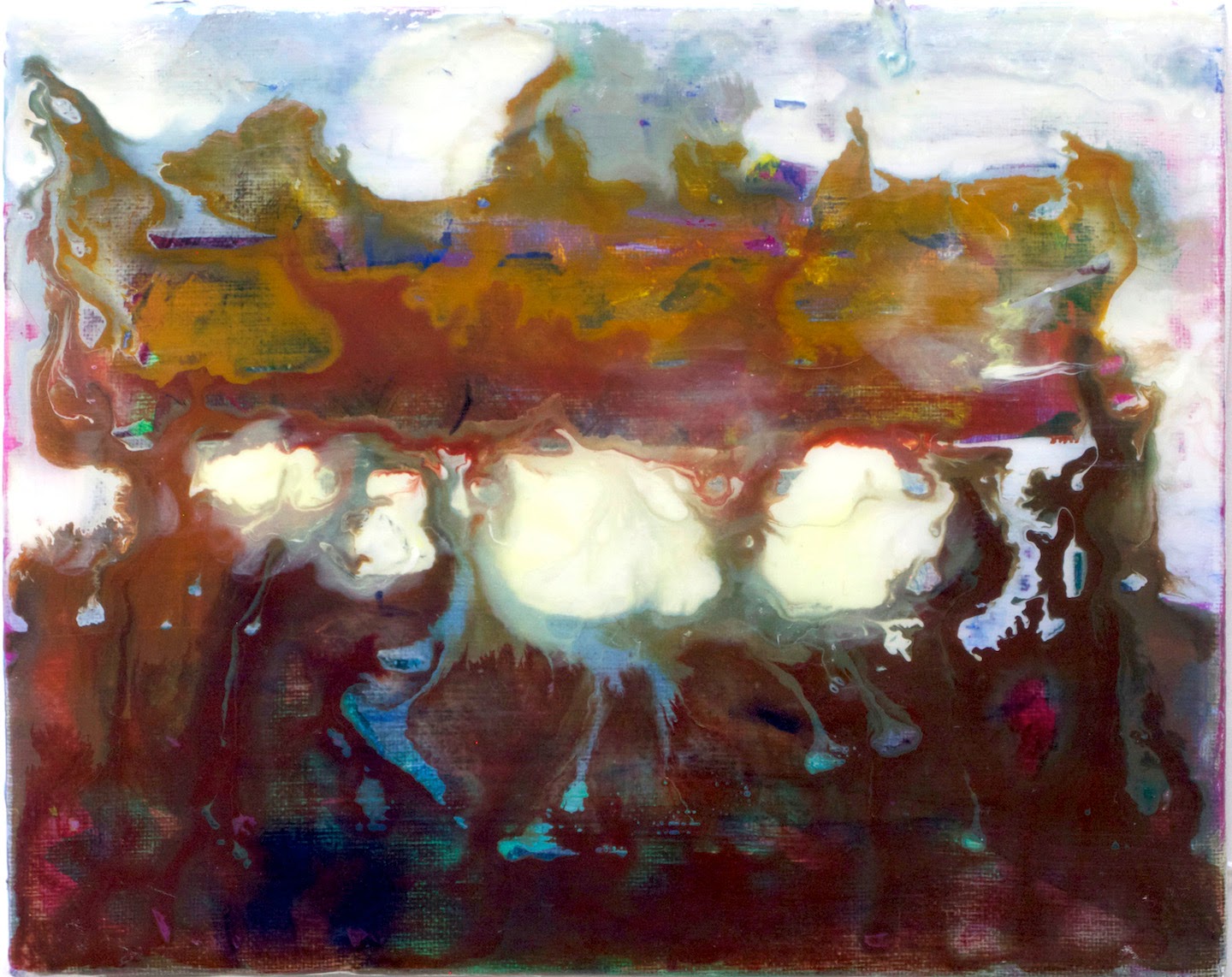 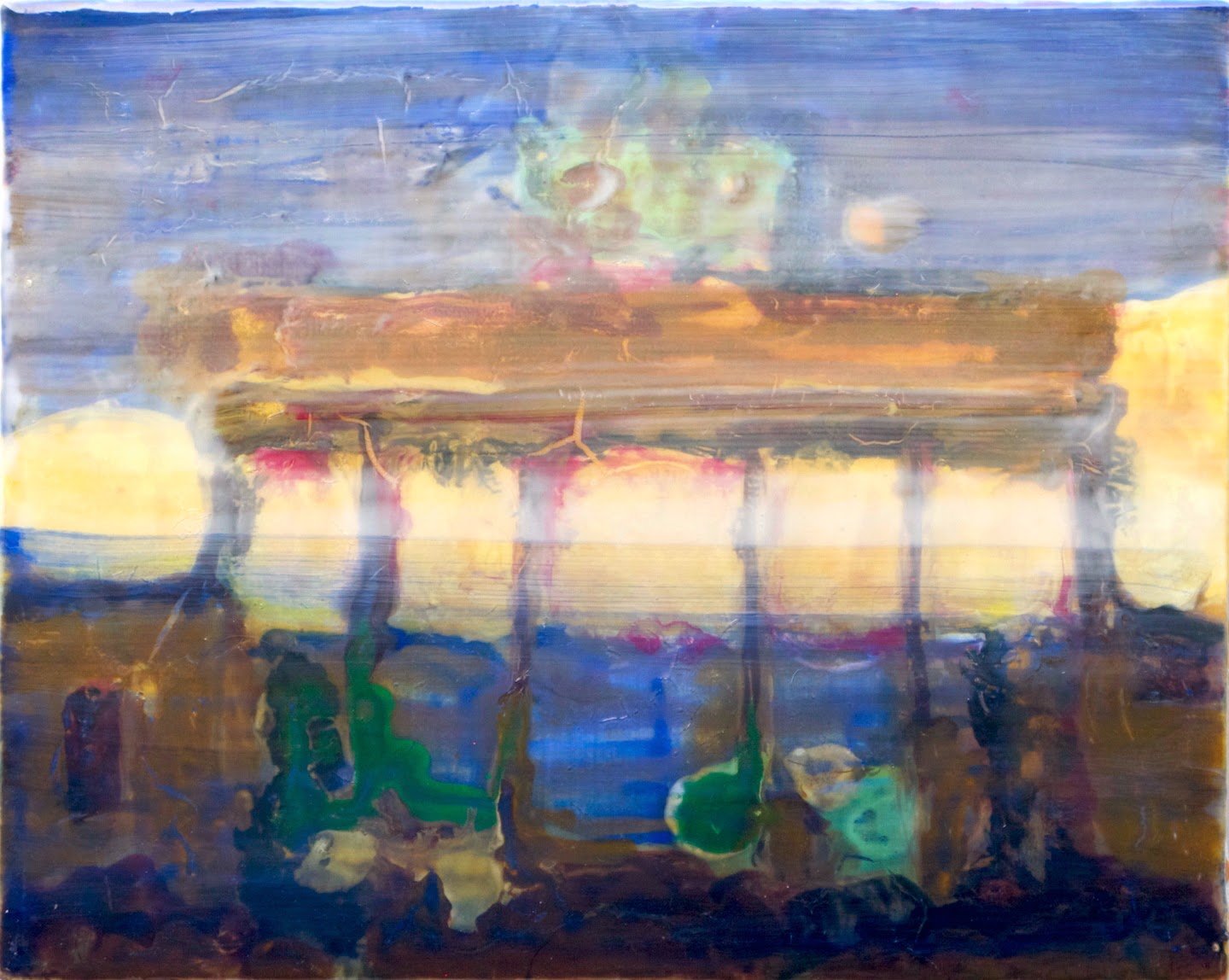 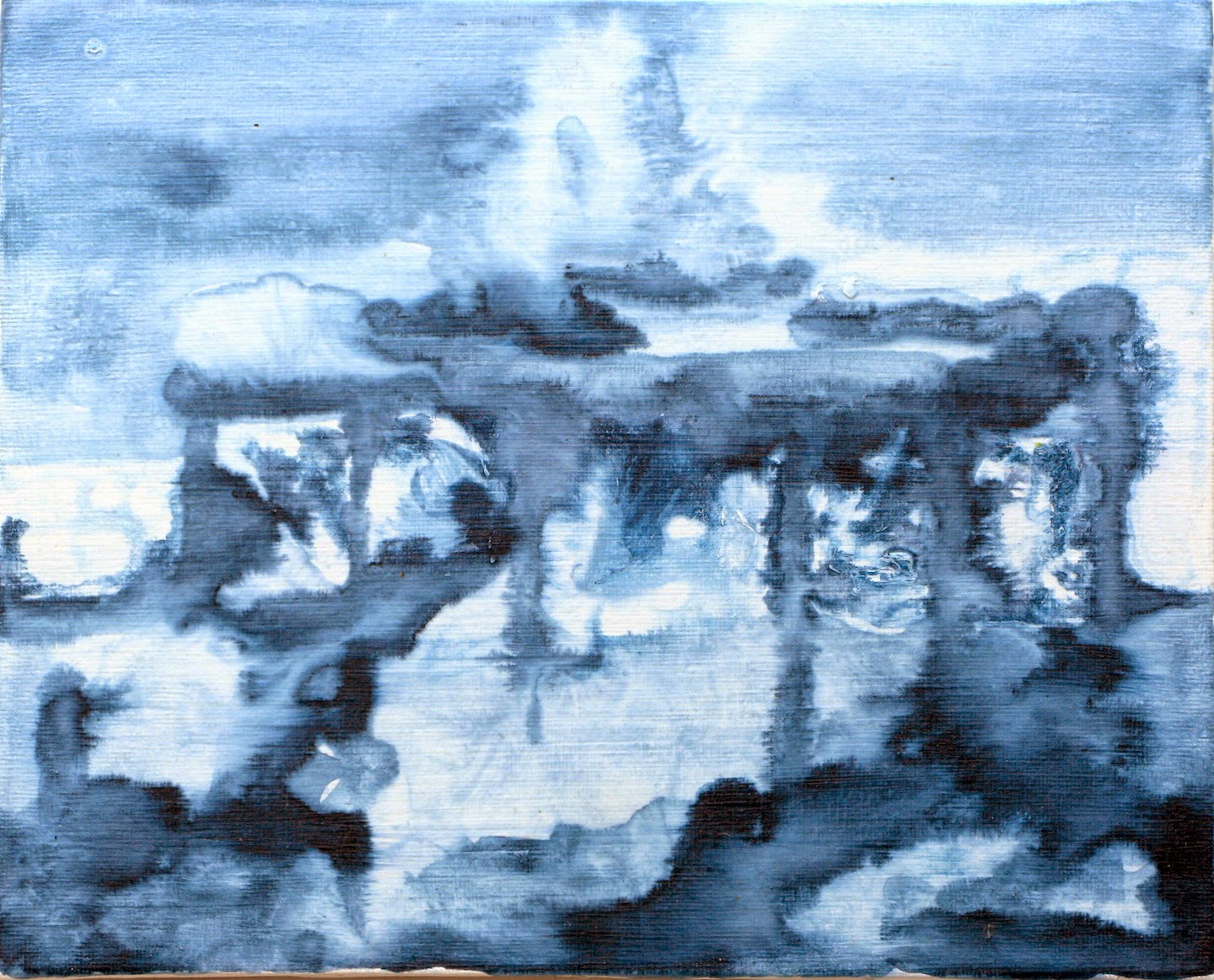 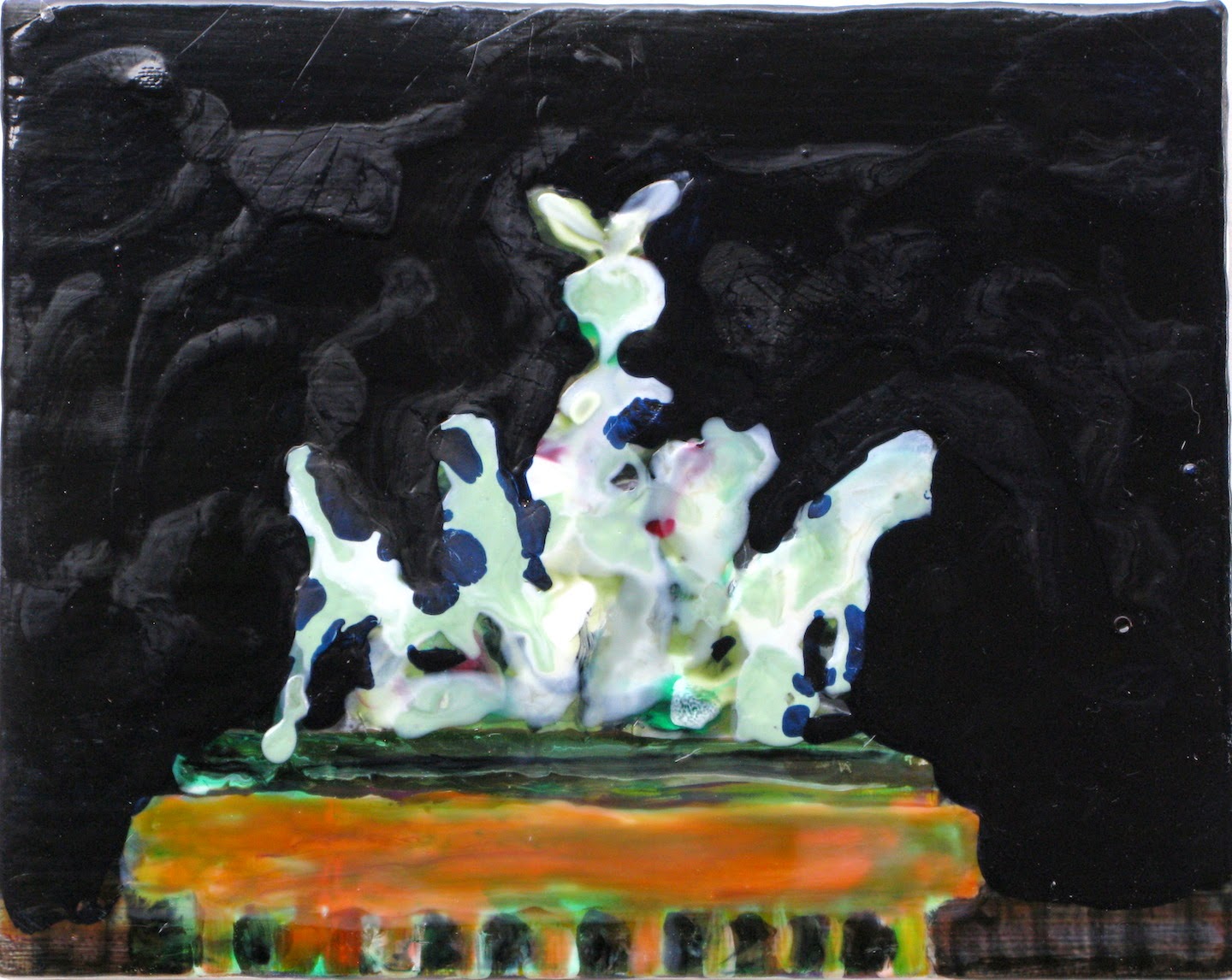 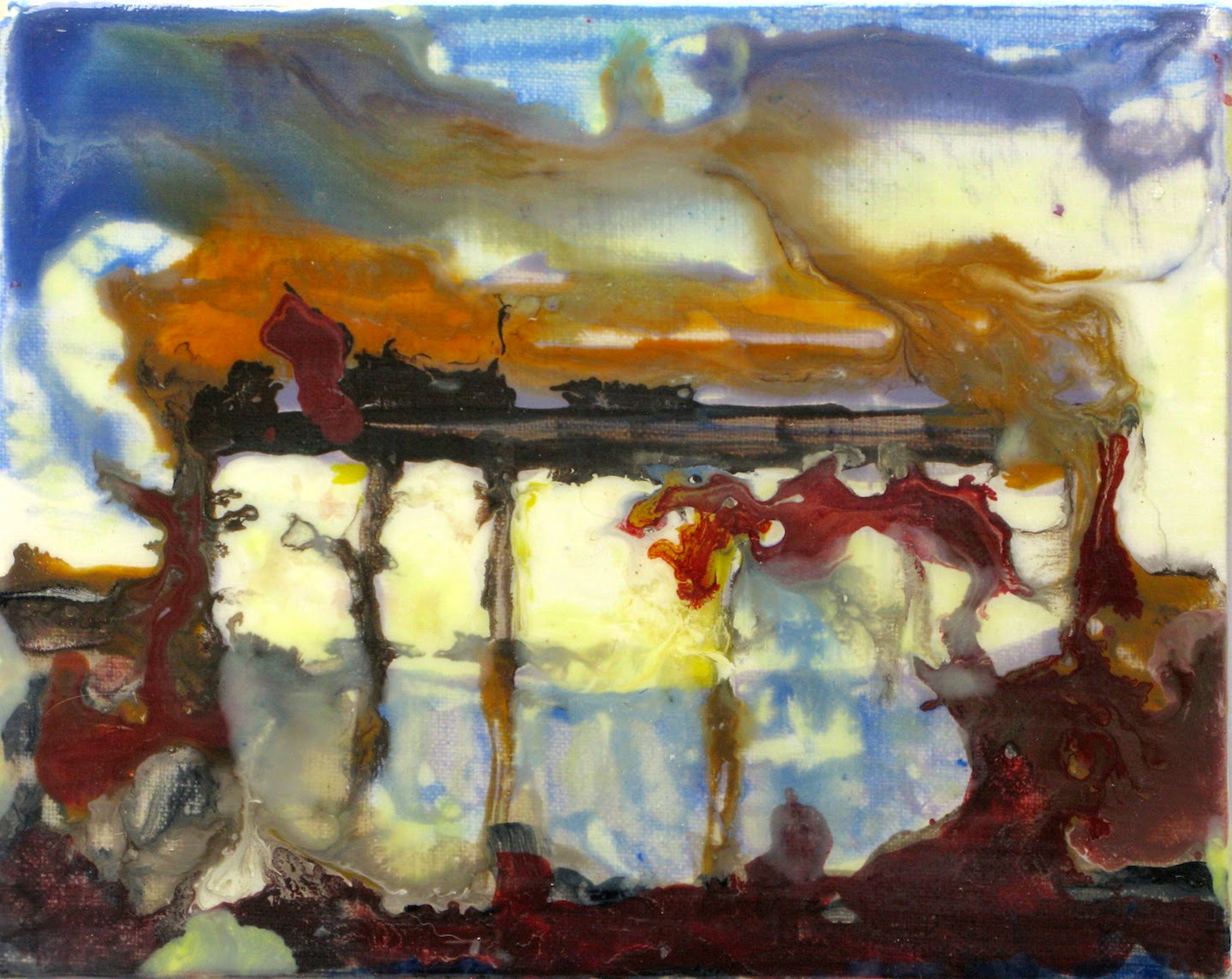 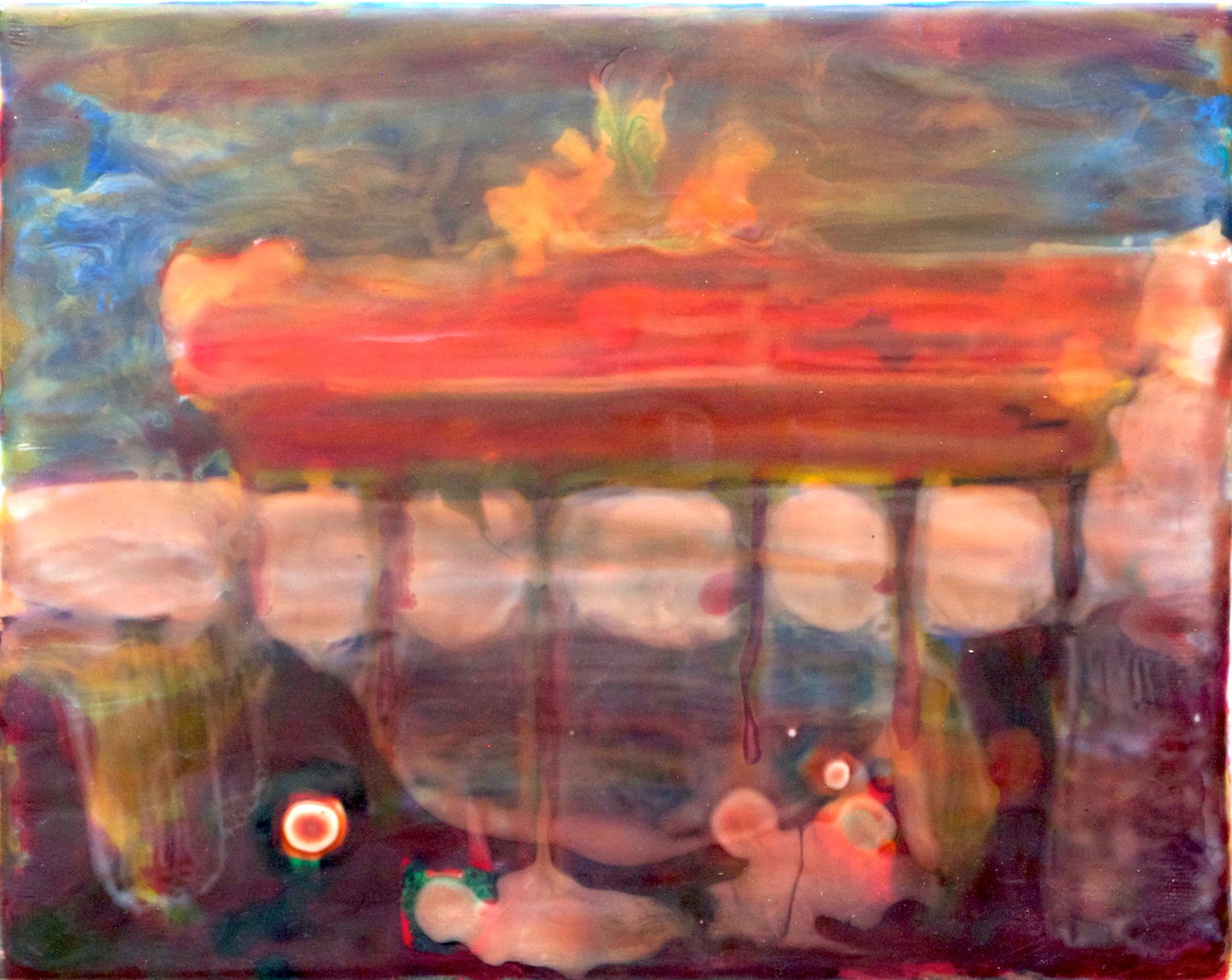 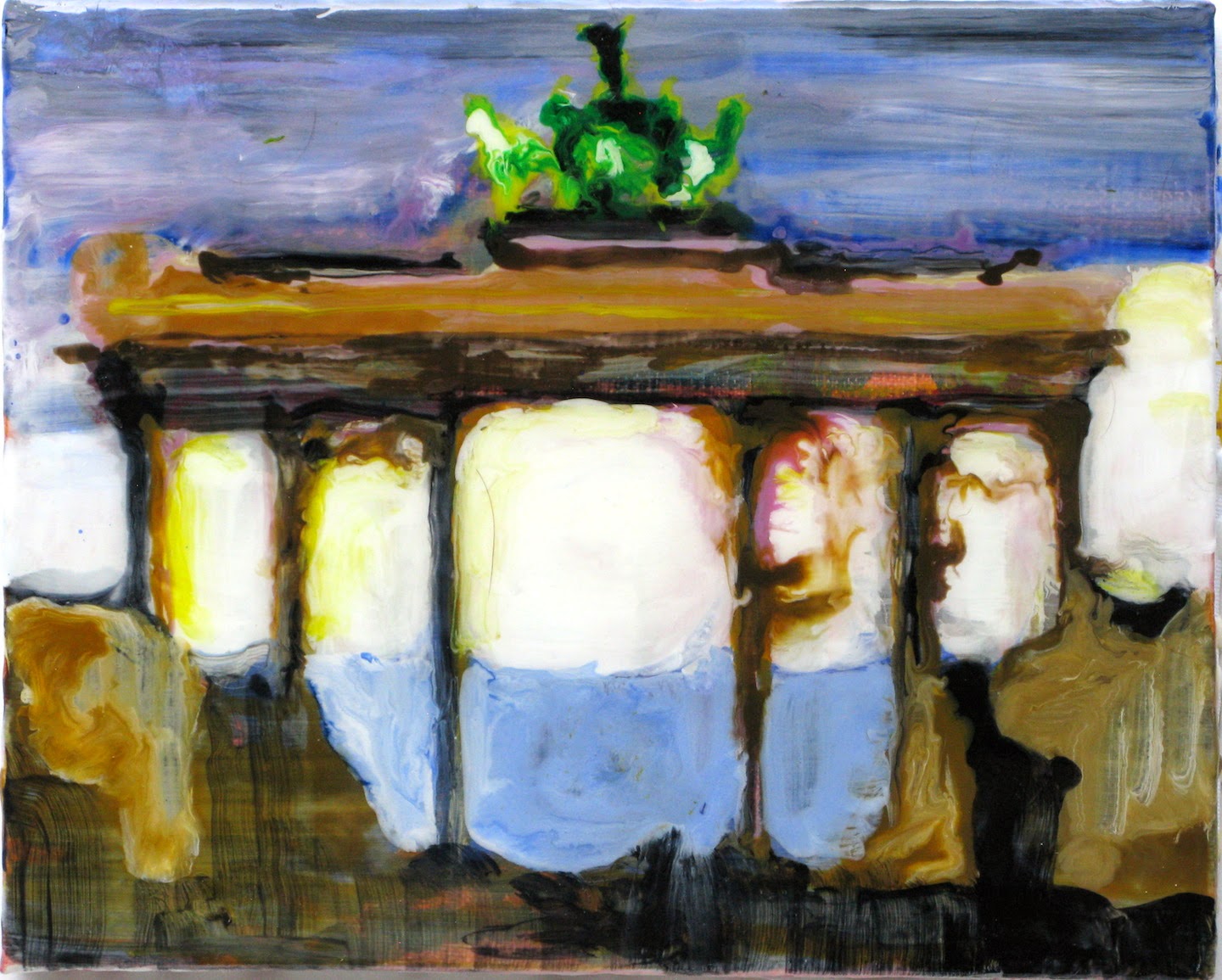 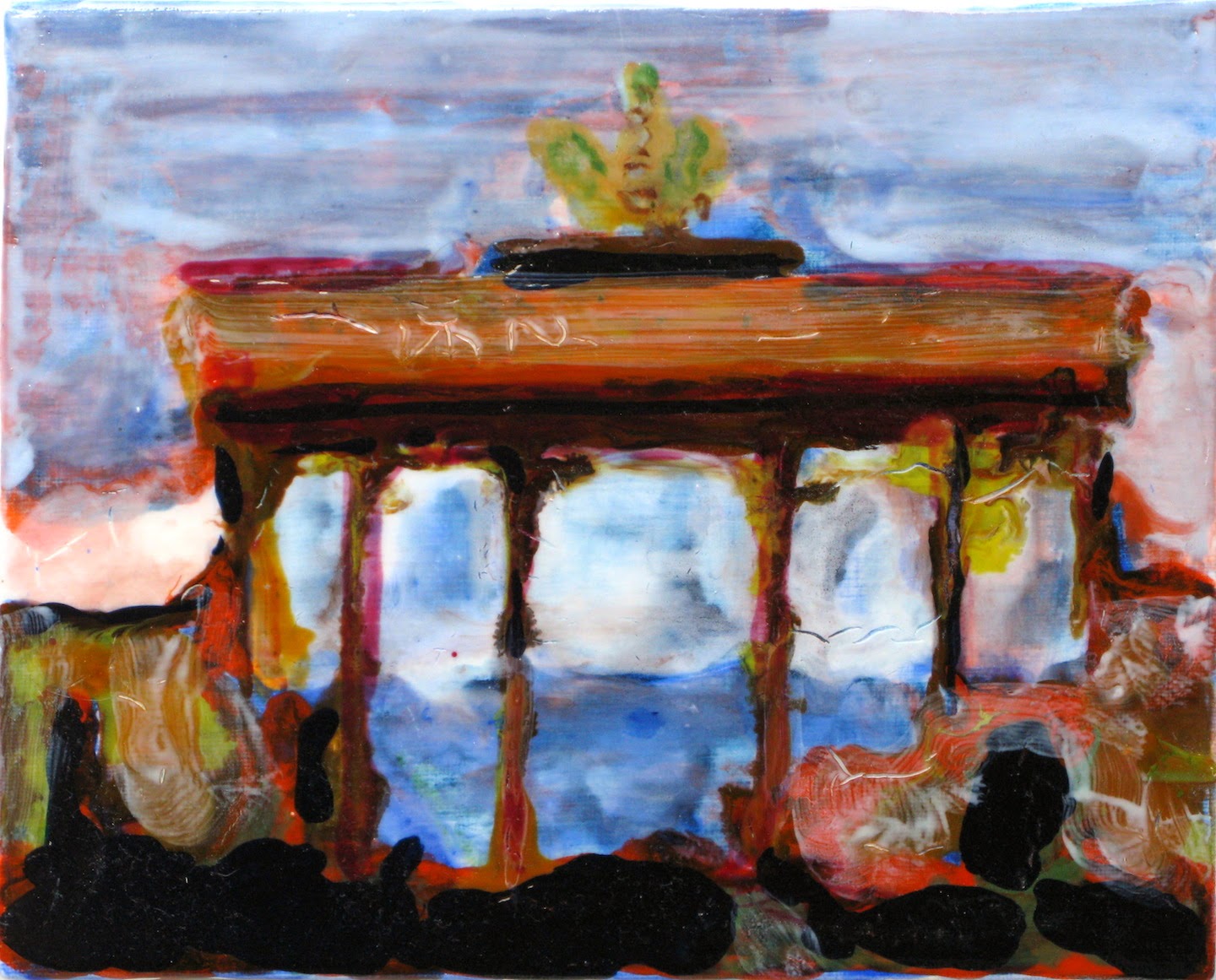 Prussian Blue
the terrible beautiful horrible twentieth century and its cold war stemming from the other wars. Berlin the city that was the symbolic heart of the cold war after it had been the centre of power of the nazi regime with its desire to take over EVERYTHING. a hot spot, a core, the essence of all of this and a strange de-centred fragmented city. residues of past events, seen and felt. the masses of graves, such as the 6,000 Russian soldiers buried in Treptower Park. public markers, such as monuments and statuary and ruins and unintentional monuments (like the Albert Speer heavy load test), and destroyed markers and the choices that are made about what to mark and not mark and unmark. the public discourse around it all,  when Palast der Repbulic (the Palace of the Republic) was torn down to make way for its replacement: a replica of the Prussian-era Palace of the former monarchy…. i saw a desire, a longing for a time BEFORE the horrible 20 century. the constant residue of suffering and genocide and rape and torture and poverty and turmoil is washed away by Prussian Blue, Berlin Blue, paint it ALL blue!!! The myth of FORMER GLORY. Prussian Blue, discovered in Berlin, beautiful intense pigment in the chemistry lab, Prussic acid. Prussain Blue pigment, a by-product of Zyklon B gas, is found on the walls of the gas chambers. Some holocaust deniers have used the fact of a relatively small of amount of Blue in Auschwitz to support their denial. Cyanide forms in the process of making Prussian blue, Hydrogen Cyanide is Zyklon B. Prussian Blue is also medicine, it can be ingested as an antidote to heavy metal poisoning.
The work is a process of mining and interrogating and searching for some sort of truth hidden beneath shame lies secrecy and gentrification. and me, walking in Berlin and trying to comprehend the image my mother, there in the belly of this monster, Berlin, 1945. the fuzziness of the photographic and painted images pointing to a form of unknowing, and a search for …… something that might help understanding. For a knowledge that I suspect can never be recovered. And yet the residue remains in the peculiar abandoned spaces, the liminal spaces, the places where nature chooses to reclaim itself…. vacant lots, railroad track, the former wall, the unofficial activity of squatters and guerilla gardeners and so on. And the animals, too, who live in Berlin, urban wildlife, the large parks. AND ALL OF THAT pointing to the ALL of historical time, of human history and the many histories like this one everywhere even as we continue with our project of slow suicide, the END of time becoming more evident, sliding into an abyss unstoppable.  And then there is the other TIME, the time of planets and nature and geology and all that will continue with or without us here. Nature renewing itself in these liminal spaces, like Suedende Park, where nature made a comeback while the humans weren’t looking. Navigating the emotional weight of it all. 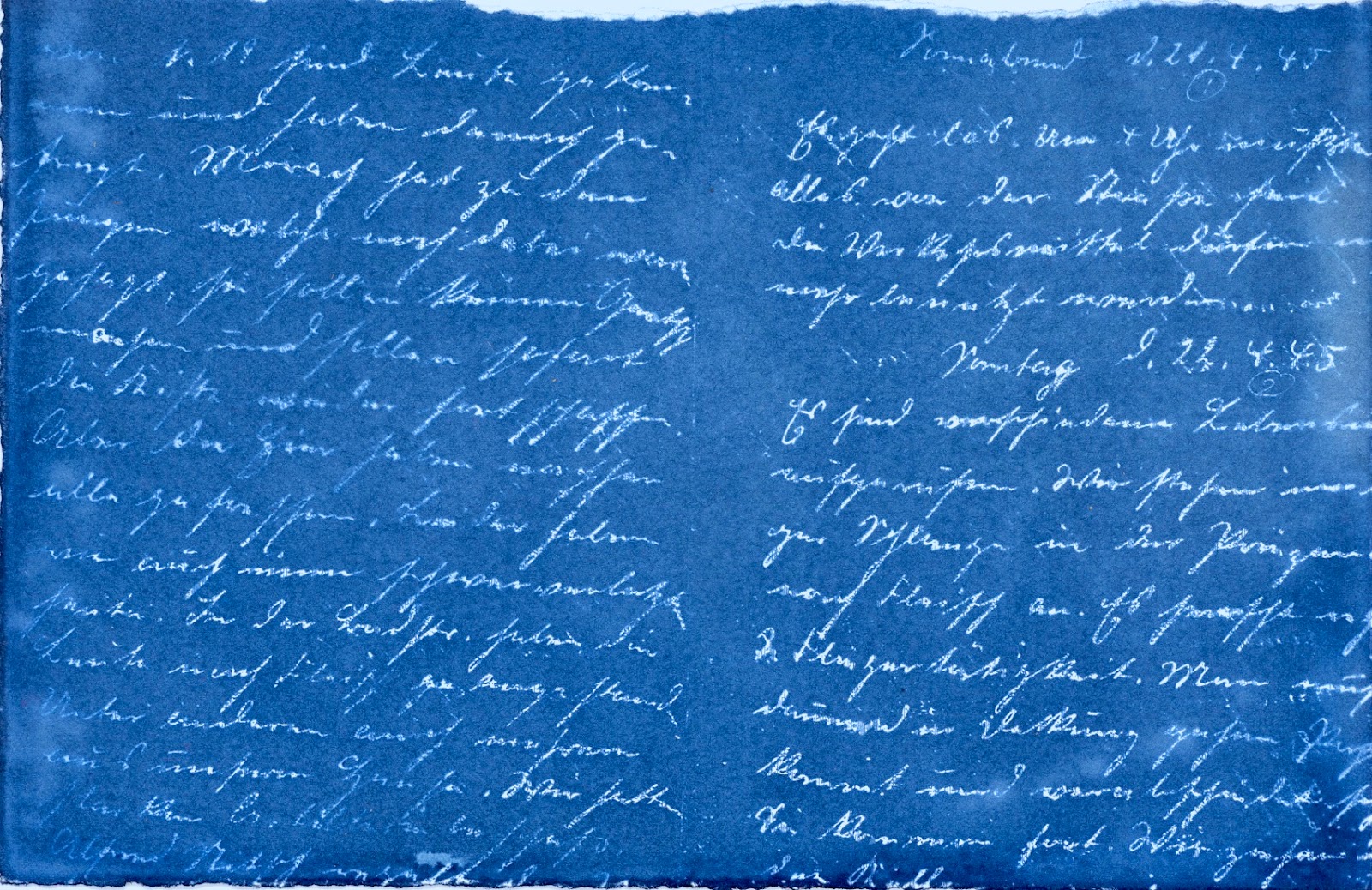 This is a cyanotype of a page from a short diary that my grandmother wrote from the 21st of April to the 28th of April, 1945, in Berlin, during the event now known as The Battle of Berlin. I never met her, she died of cancer in 1946. I suspect that she was not generally a diary keeper, but that she wrote these pages for her husband and children who she thought she may or may not see again. Or perhaps she wrote to to calm herself, as she and her neighbours waited for the end. I don't know who she wrote for, but, as it turns out, I am a recipient of her words (69 years later). Everyone in the family survived as did the home itself. Remarkable. 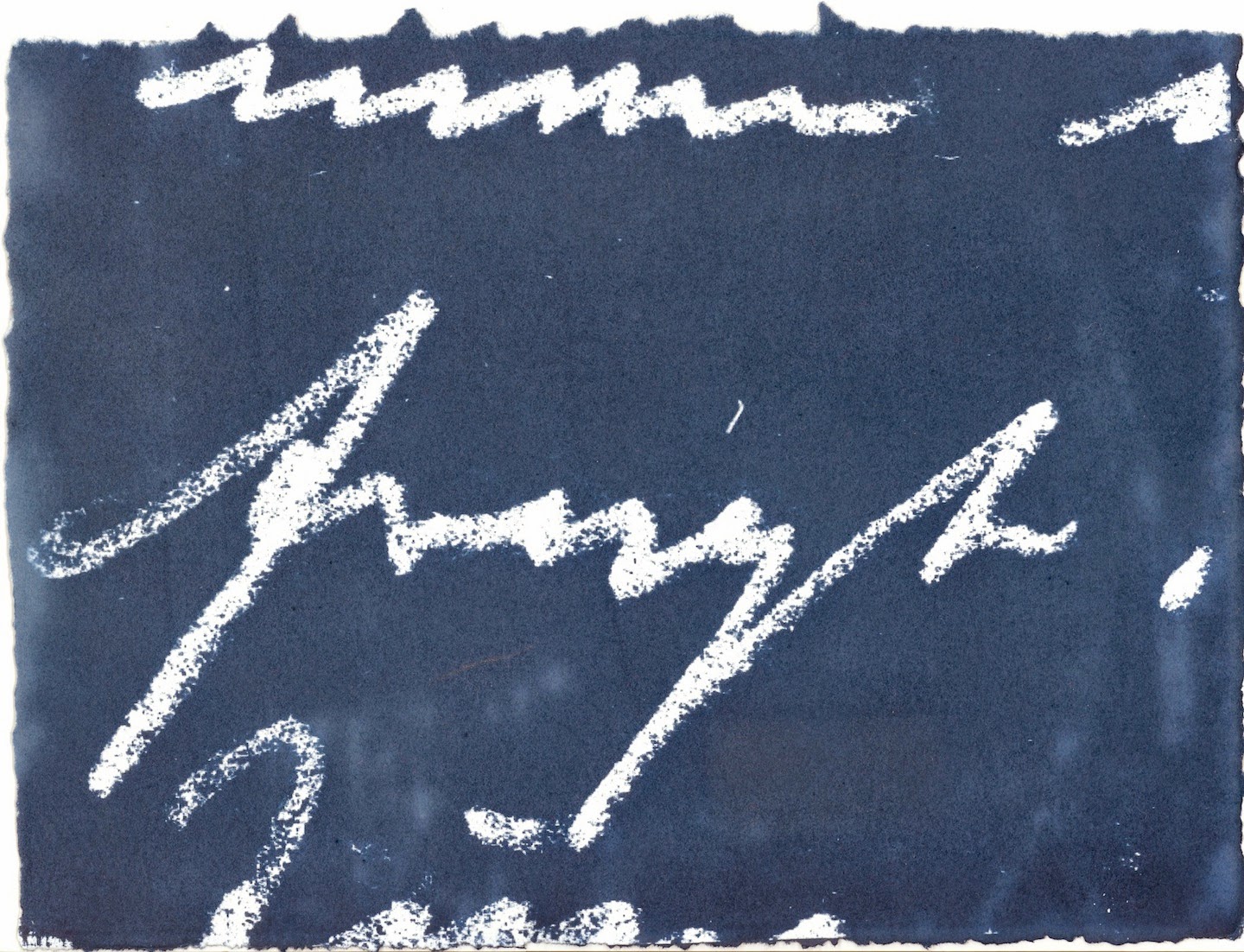 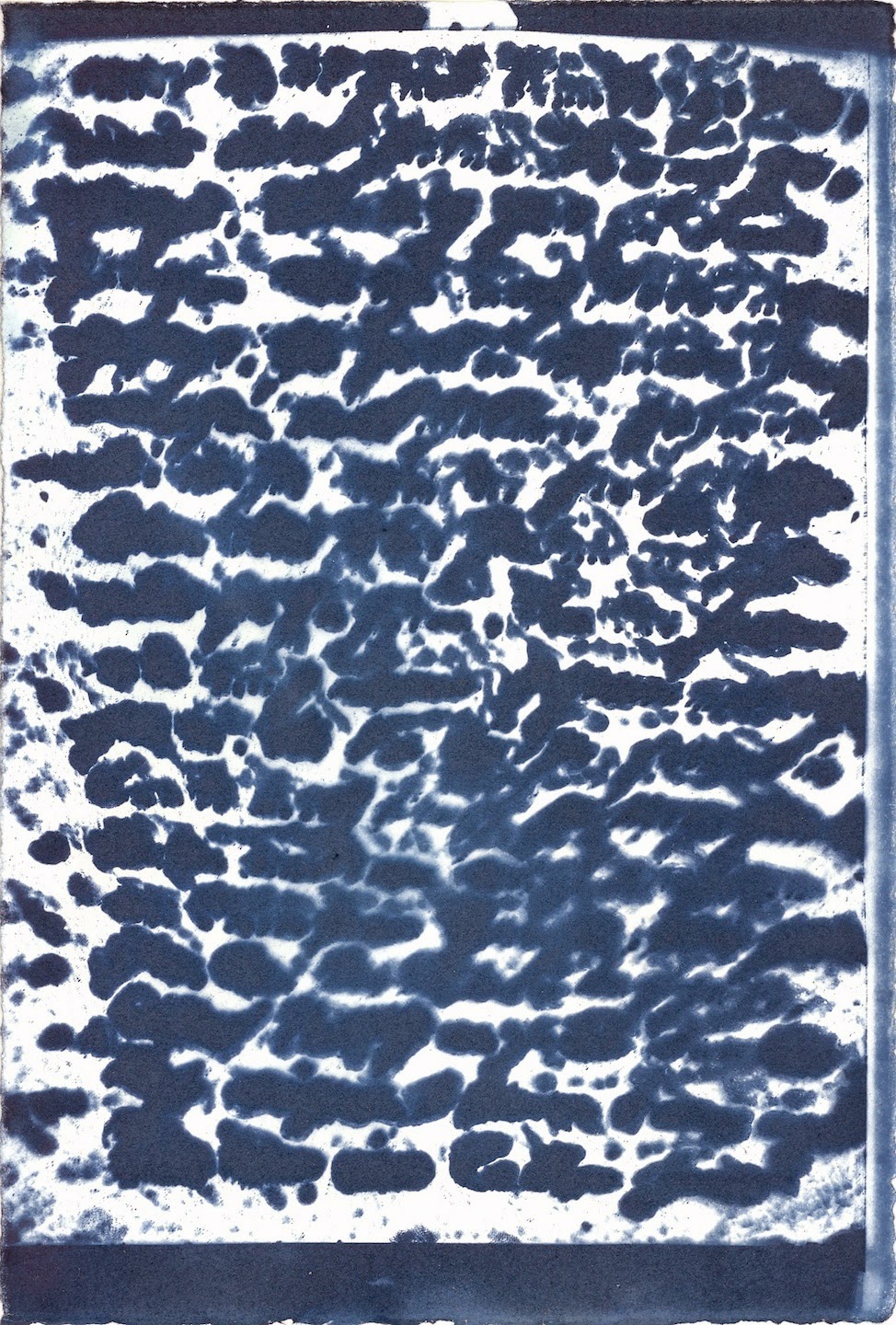 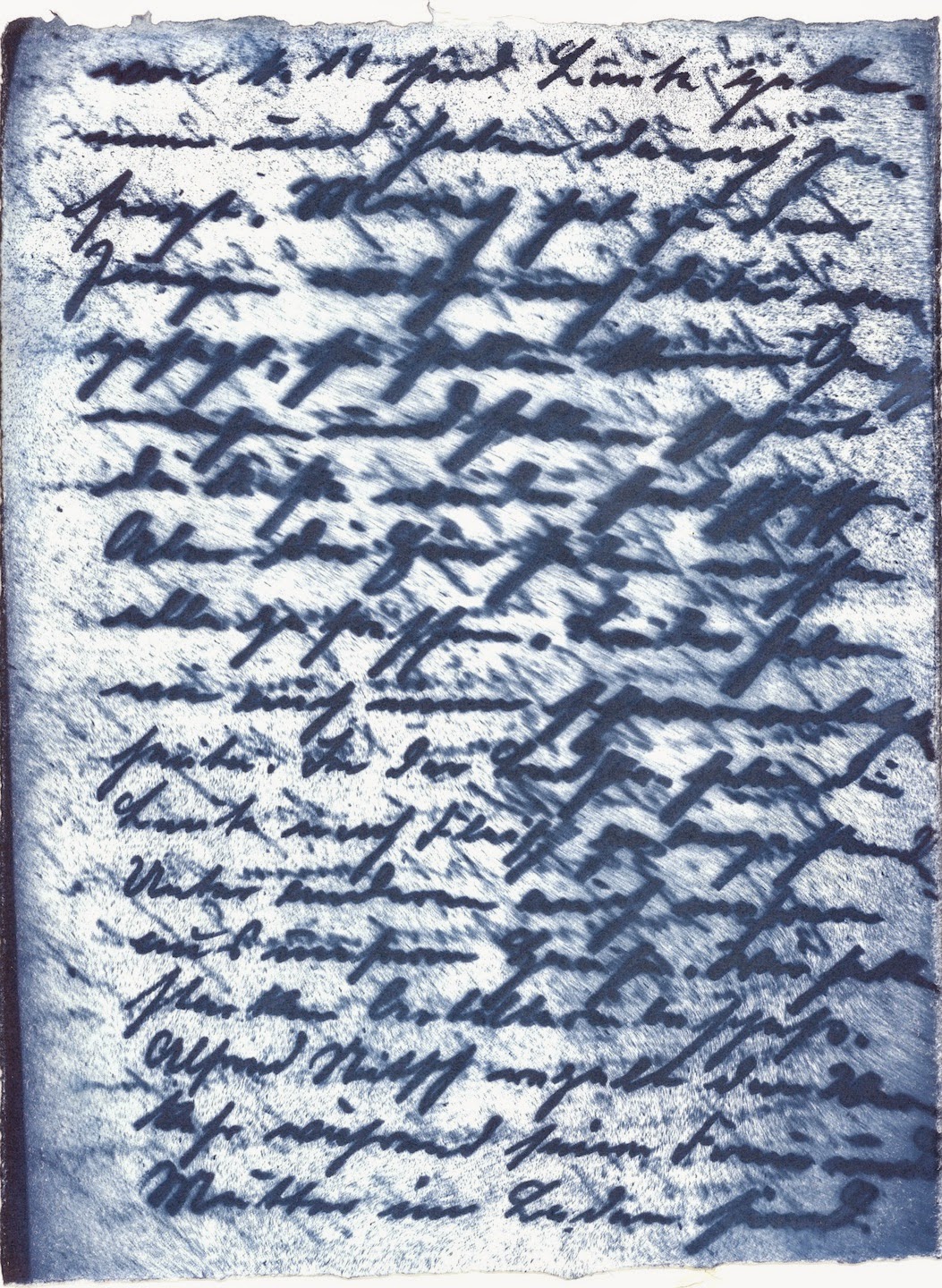 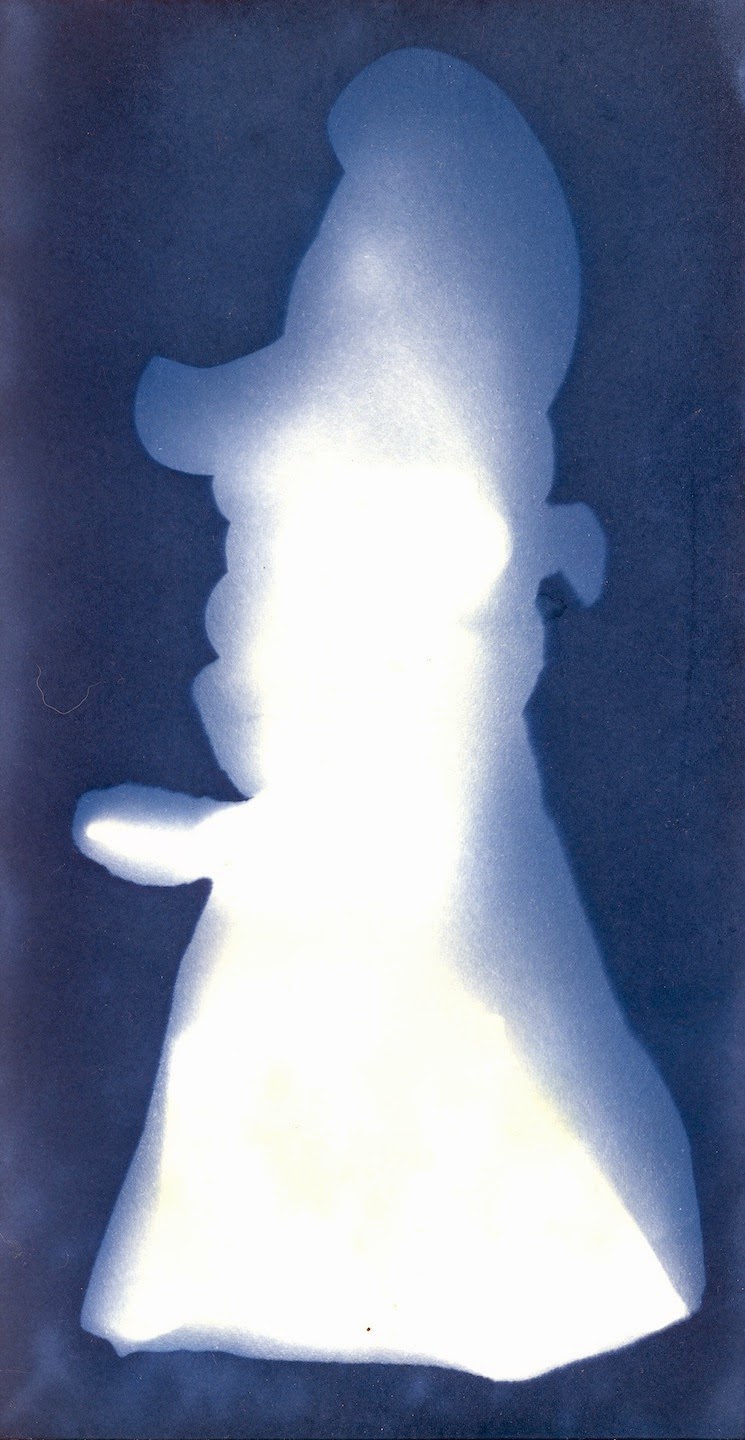 Kasper (cyanotype photogram)
This photogram was made with a Kasper hand puppet sent from Germany when I was a child. 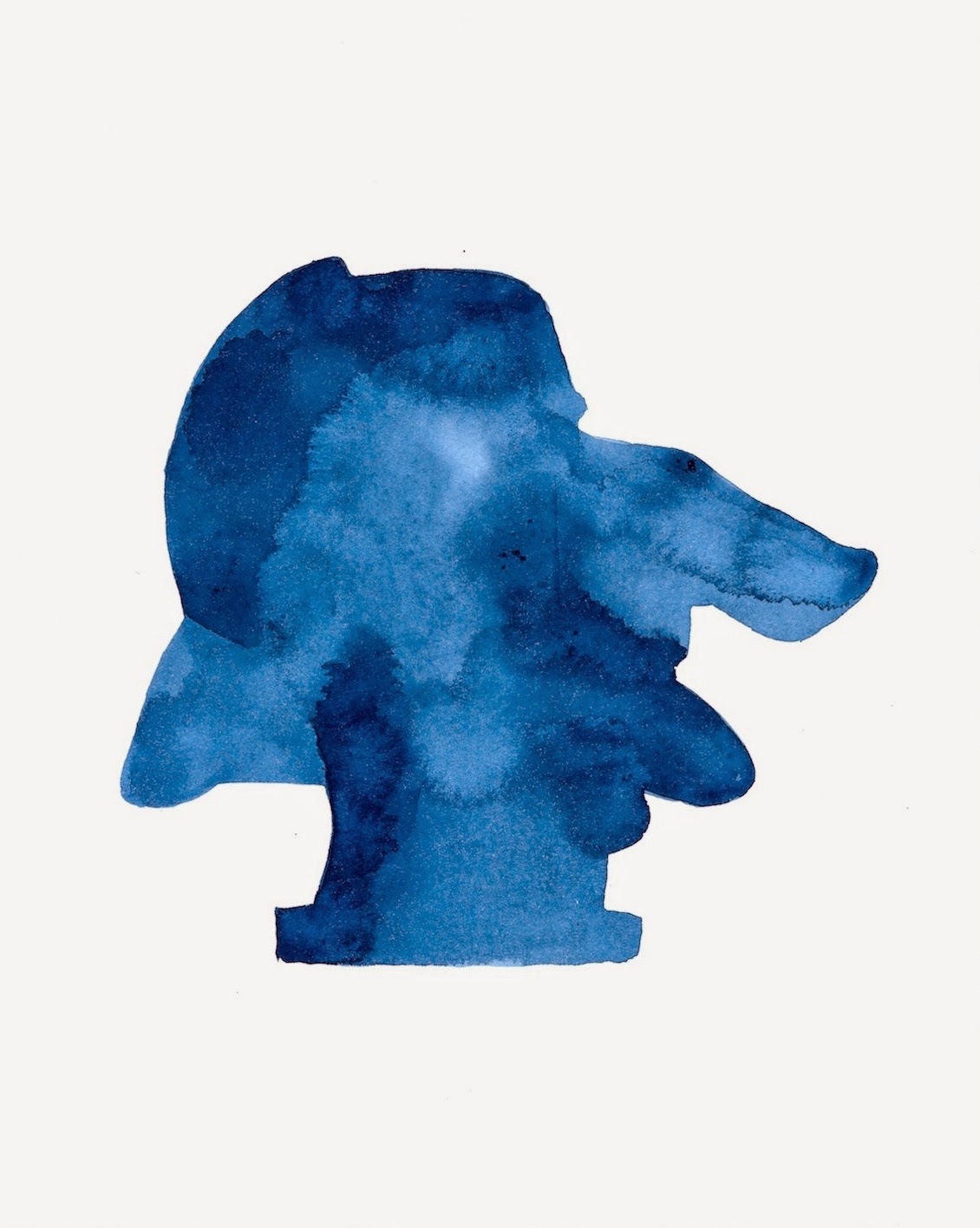 The Witch (gouache on paper) 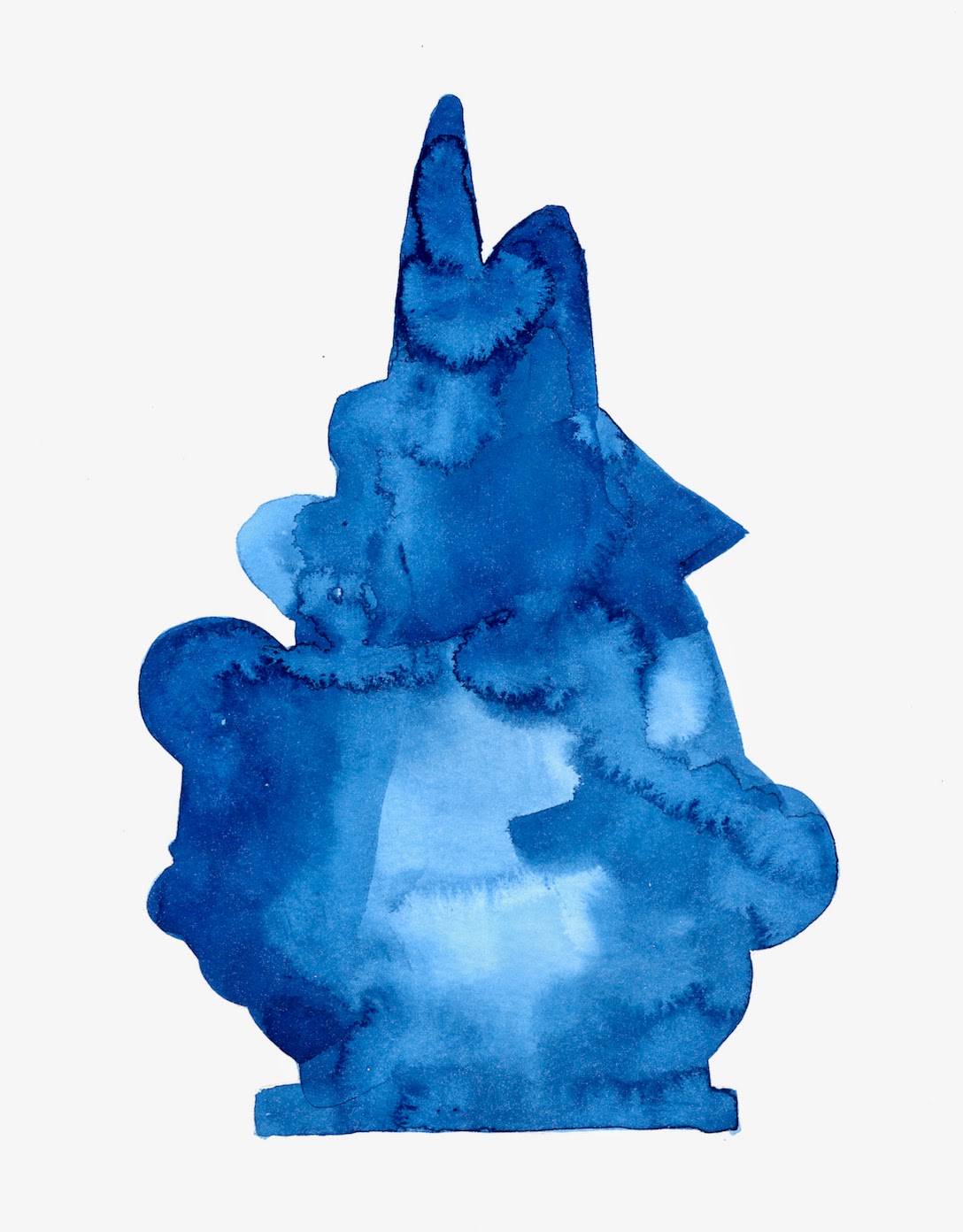 The King (gouache on paper) 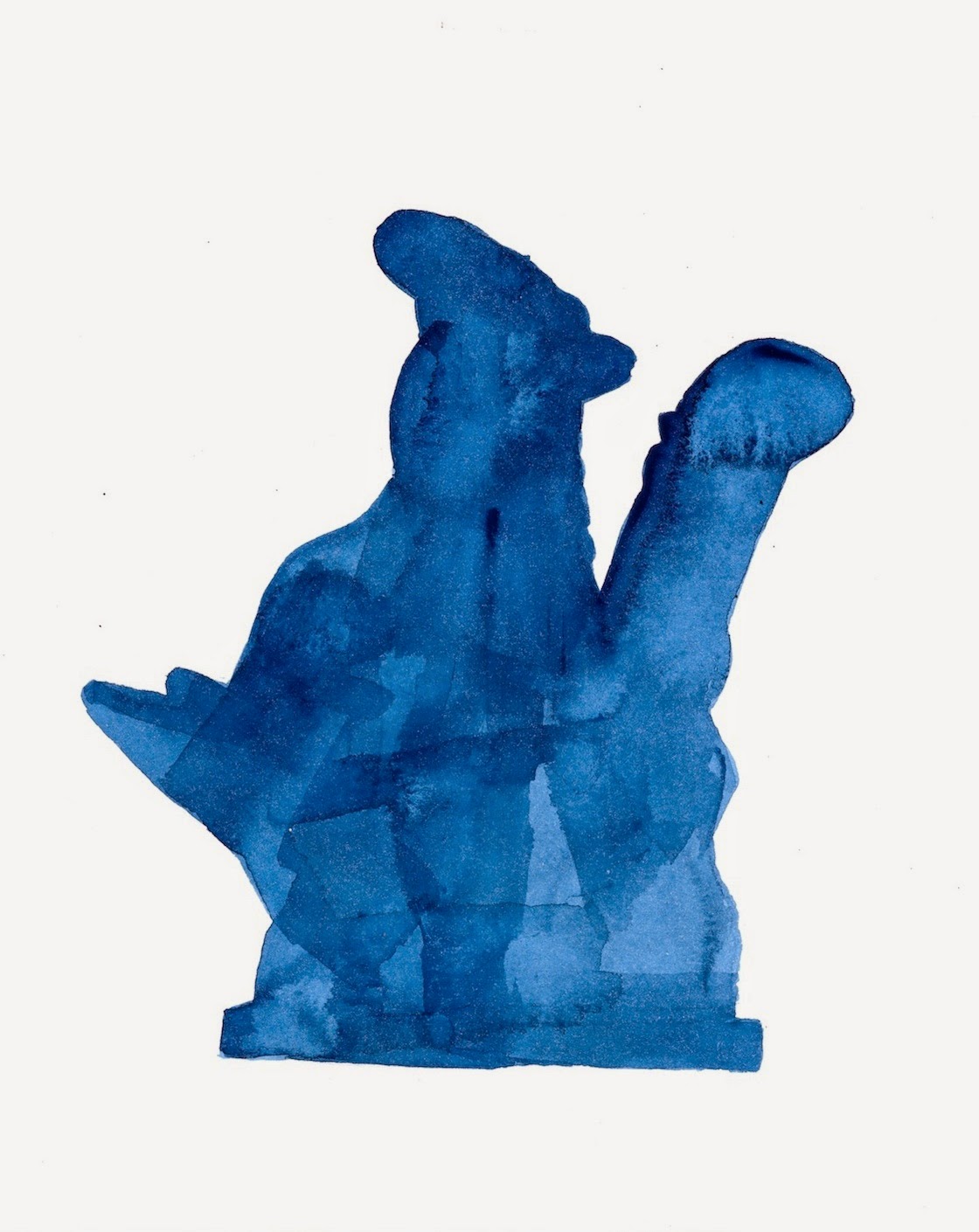 The Wolf (gouache on paper)

Kasper Puppet Theatre is a German puppet theatre. There is a set of a set of characters including the main protagonist Kasper, but these are often combined with Grimm characters or other famous story book figures such as Max and Moritz. 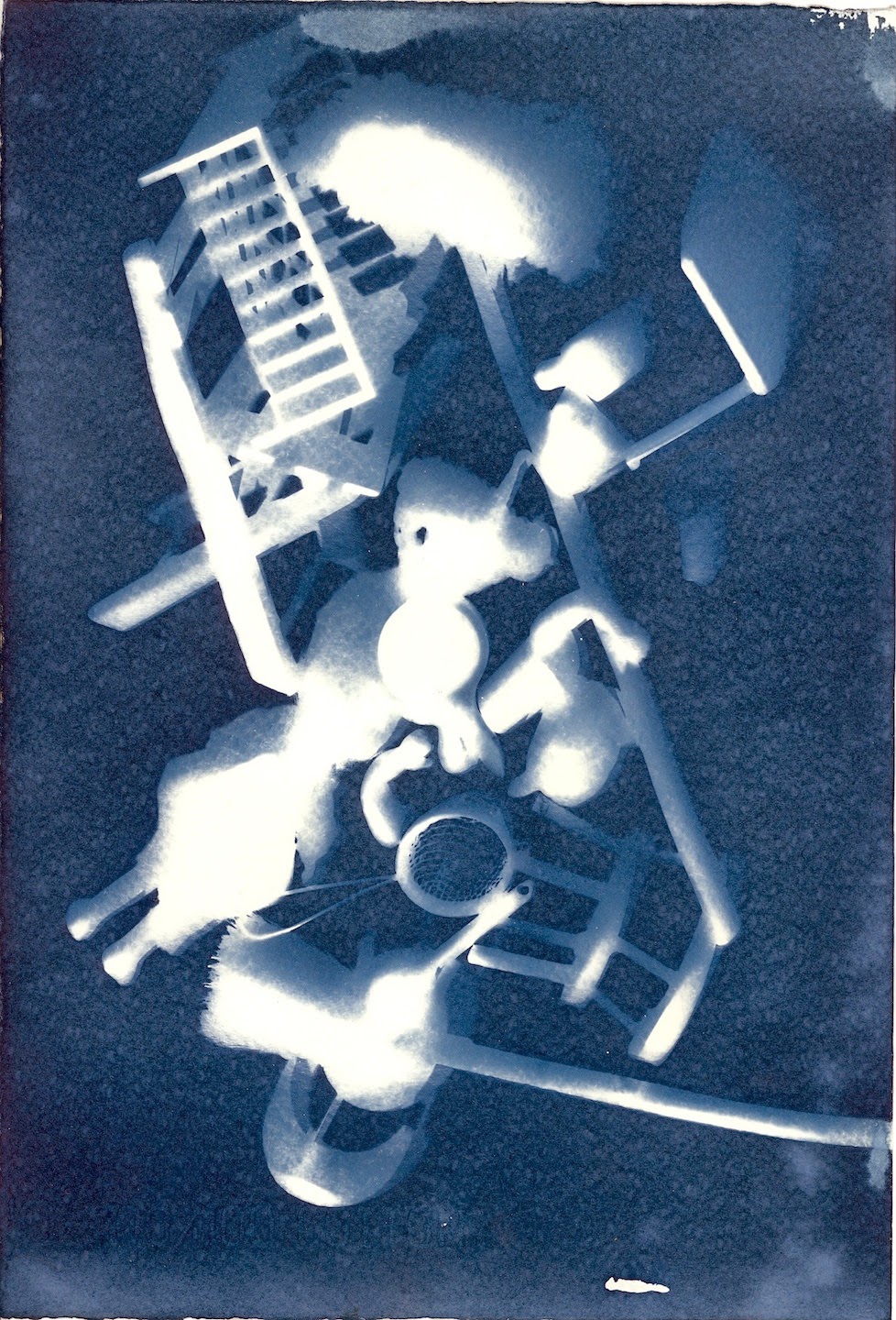 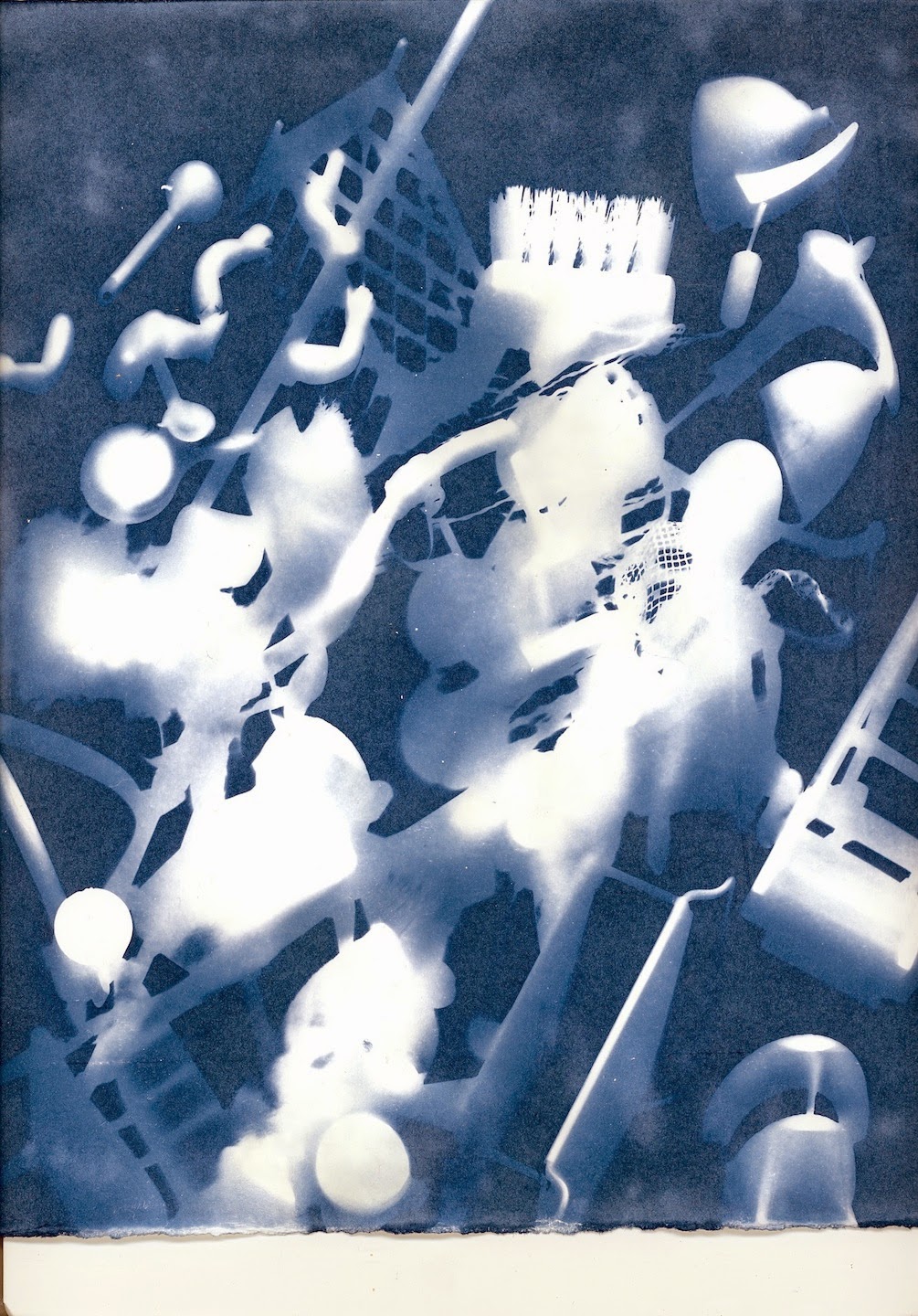 These cyanotype photograms were made using doll house furniture, toys and other miniature objects that were sent from Germany when I was a child. 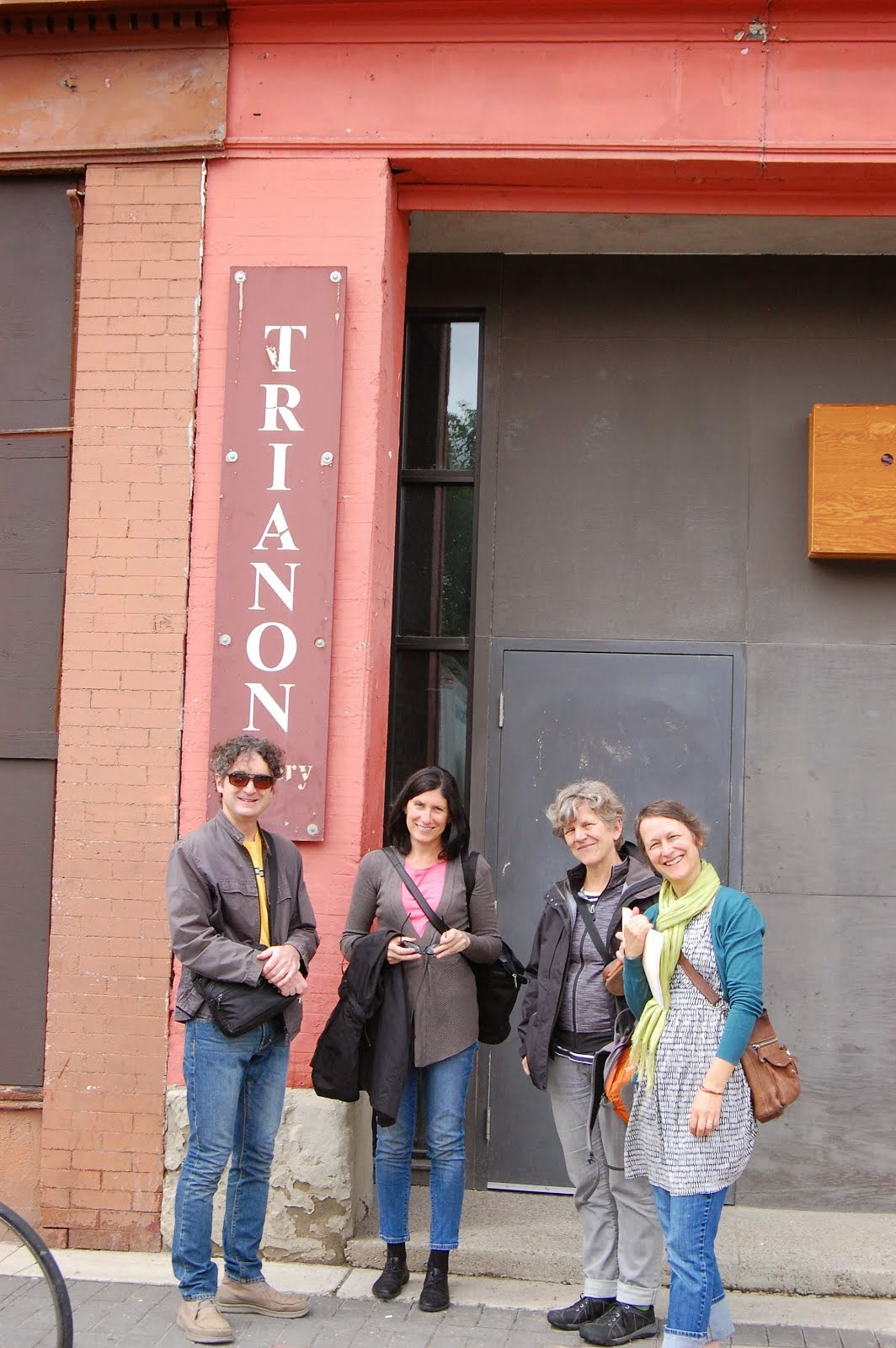 In front of the Trianon Gallery, Spring 2014. Photo by John Savill.